The Eblana String Trio is a long established and highly acclaimed group championing the great music for string quartet minus one. 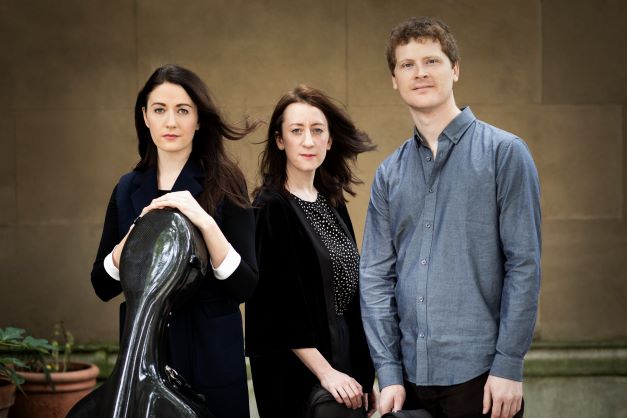 Formed in 2006 at the Royal Northern College of Music, the trio has given countless performances throughout Ireland, the UK and beyond, winning praise from audiences and critics alike for their powerful interpretations of this often neglected repertoire.  Their 2021 album, “The King’s Alchemist” was selected as chamber CD of the Month in a 5-star review in BBC Music Magazine.

The Eblana Trio’s debut album, “The King’s Alchemist” was released with Willowhayne Records in 2021 to great acclaim. The album was selected as chamber CD of the Month in a 5-star review in BBC Music Magazine.

City Music Foundation Artists, the trio are passionate about championing new repertoire and have worked closely with many of the leading British composers on their works, including David Matthews, Hugh Wood, Robin Holloway, and James Francis Brown. They have also given the World Premieres of works written for them by Joel Rust, Grace-Evangeline Mason, and Rhiannon Randle.

In addition to their studies at the Royal Northern College of Music the trio attended the International Musicians’ Seminar Prussia Cove, as well as sessions of the European Chamber Music Academy.  From 2013 until 2015 they held a Junior Fellowship in chamber music at Royal Birmingham Conservatoire and now continue their association as visiting tutors in Chamber Music.