Presented by BA in Contemporary and Applied Theatre Studies at Mary Immaculate College. This play is part of their summer repertory season with two exciting and rarely seen theatrical works taking the Lime Tree Theatre stage over three days in May.

This magical and deeply compassionate play about identity and the capacities of the human spirit is presented by the fourth-year students. 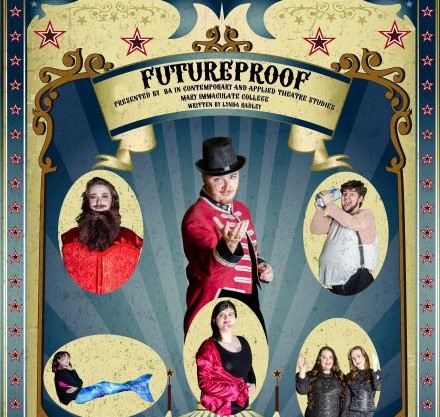 At a time when science and religion have conspired to make freak shows shameful, Robert Riley, owner of Riley’s Odditorium, struggles to find ways to keep his company afloat. There’s no money in the coffers and they’ve had to eat the horse. Only the mermaid act is bringing in the punters and she’s just holding her breath…

Futureproof, Lynda Radley’s play, was first staged at the Traverse Theatre, Edinburgh, in August 2011, in a co-production with Dundee Rep. It won an Edinburgh Fringe First Award. The Irish premiere took place at The Everyman in June 2017 as part of Cork Midsummer Festival.